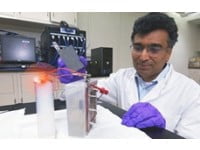 Â Electric vehicles (EVs), whether hybrid or pure-electric for land, water or air, employ batteries on board, where supercapacitors have not replaced them. For more on this see the IDTechEx report, “Electric Vehicle Traction Batteries 2012-2022” (www.IDTechEx.com/evtraction).

However, EVs also employ larger battery banks in some types of stationary fast-charging infrastructure beyond the vehicle and sometimes static battery banks are used to capture braking energy of electric trains, though here supercapacitors are increasingly proving more reliable and lower in cost over their (longer) life. See the IDTechEx reports, “Electrochemical Double Layer Capacitors: Supercapacitors 2012-2022” (www.IDTechEx.com/EDLC ) for a broad treatment and “Supercapacitor / Ultracapacitor Strategies and Emerging Applications 2013-2025” (www.IDTechEx.com/SuperApps ) for detail on these aspects and the technology, including many interviews.

Indeed, there is much talk of electric vehicles becoming part of the smart grid and closely associated with frequency and load balancing battery banks, so the search for better battery technology in this EV firmament continues to be very broad. For more see the IDTechEx report, “Electric Vehicle Charging Infrastructure 2012-2022” (www.IDTechEx.com/evcharge ).

A place for iron in rechargeable batteries

Most of the existing manufacturers and nearly all of the new manufacturers of lithium-ion “Li-ion” batteries use lithium iron phosphate active cathodes because of advantages such as no materials subject to severe price hikes, low cost materials and easier patent position. They have good temperature performance that can be reflected in greater safety though no Li-ion cell is inherently safe and the first defender of safety is the battery management system (BMS), not the cell. Several recent fires and explosions have been related to something other than the cells.

Look deeper at the chemistry and we again see a different picture. The Japanese Institute for Information Technology notes that the leaders in sales of Li-ion batteries for vehicles are in Japan, which has the lowest material cost for the advanced materials, and Korea, which has the fastest production lines, not China. We are told that the Japanese and Koreans, notably

Panasonic including its Sanyo subsidiary, AESC and LGChem, base their success on ignoring lithium iron phosphate (LFP).

Certainly, huge leaps in energy density and, potentially, cost/kWh, have been reported just lately, for example by Envia Systems. In development, this has broken the world’s record for energy density at 400 watt-hours/kg, more than double today’s batteries. This matches the best of the so-called rechargeable lithium/lithium metal batteries that do not employ the lithium intercalation at the electrode that characterises Li-ion. Such traction batteries are in use in modest quantities for military, aerospace, unmanned vehicle and car purposes. The small number of companies preparing them for major rollout sometimes claim they will replace Li-ion traction batteries because of various advantages, not least energy density, where some feel that 600 kWh/kg will be achieved – maybe more. Unfortunately, use of iron does not give the best potential in these respects even though Volvo Bus and Truck, for example, swears by LFP because it has other priorities. For a bigger picture, IDTechEx has looked at, “Most-Needed Chemicals for New Disruptive Electronics and Electrics” (www.IDTechEx.com/chemical ) finding that the chemistry of iron is of modest importance overall. Is that about to change?

For rechargeable batteries, potentially even including very big ones, a very different approach is being revisited. The “Super-iron” battery is the name for a new class of rechargeable electric battery reminiscent of Edison’s nickel-iron battery all those years ago. It involves a special kind of ferrate salt (iron(VI)). Potassium ferrate (K2FeO4) or barium ferrate (BaFeO4) can apparently be used in this new class of battery researched at Massachusetts Institute of Technology and elsewhere since about 2004. The salts readily accept three electrons per ion, meaning more energy stored. They usually employ the same zinc anode and electrolyte as an alkaline battery, but energy density is claimed to be around 50% higher.

“A High-Performance Rechargeable Iron Electrode for Large-Scale Battery-Based Energy Storage” is the topic of a new article in the Journal of The Electrochemical Society (2012, Volume 159, Issue 8, Pages A1209-A1214). In this work, Aswin K. Manohar et al. of Loker Hydrocarbon Research Institute, Department of Chemistry, University of Southern California, Los Angeles, California have shown a high-performance rechargeable iron electrode formulated with carbonyl iron and bismuth sulfide that is “far superior in characteristics compared to a commercially available iron electrode.” They achieve one tenth of the usual hydrogen evolution rate, a high charging-efficiency at 96%, a high discharge capacity at 0.3 Ah gâˆ’1, and also a twenty-fold increase in capacity for the two-hour discharge rate. “The high level of purity of carbonyl iron combined with the in-situ produced bismuth electro-deposits suppresses the wasteful evolution of hydrogen, while the in situ formation of mixed-valent conductive iron sulfides facilitates high discharge rates.” Apparently, the efficiency and discharge performance were stable with repeated cycling.

Sri Narayan, professor of chemistry at his lab in USC Dornsife researching in iron electrodes.

The researchers have also demonstrated a viable “pressed-plate” type battery electrode that can be inexpensively fabricated using this new formulation of active materials. They say that these high-performance electrodes “have broken the once-formidable barrier of low charging efficiencies and unneeded hydrogen evolution in iron-based aqueous alkaline batteries. Thus, both iron-air and nickel iron batteries can now become the basis for low-cost, durable, and efficient large-scale electrical energy storage systems.”

The research was supported by the U.S. Department of Energy ARPA-E (GRIDS program, DE-AR0000136), the Loker Hydrocarbon Research Institute, and the University of Southern California.

If the iron battery, as opposed to the LFP version of Li-ion batteries, became popular again after over 100 years it will be part of a pattern. The switched reluctance motor was invented over 100 years ago and it is only now finding a toehold as a traction battery, though it has long been used in other applications. Tesla’s asynchronous motor (“AC induction”) became popular as a traction motor only after 100 years, particularly in large electric vehicles like buses and trucks and heavy duty ones such as forklifts. See the IDTechEx report, “Electric Motors for Electric Vehicles 2012-2022” (www.IDTechEx.com/emotor ). IDTechEx is preparing a report on fuel cells for electric vehicles and these may become popular as hybrid vehicle range extenders but over 130 years after their invention.