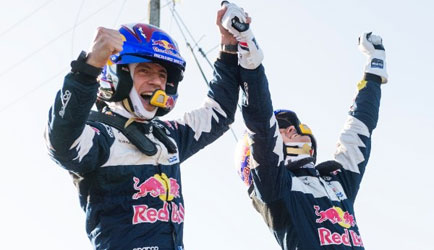 Frenchman Sébastien Ogier will contest Kennards Hire Rally Australia next month as the 2017 World Rally Champion after clinching his fifth consecutive title on the penultimate round in Wales on Sunday October 29. Dayinsure Wales Rally GB was won by Ogier’s M-Sport teammate Elfyn Evans, with Hyundai driver Thierry Neuville 37.3 seconds behind.

A further 7.9 sec back, Ogier took third place and enough points to put his championship beyond challenge before the series finale on the NSW Coffs Coast on 16-19 November. With a third M-Sport Ford Fiesta driver Ott Tänak finishing sixth, the British privateer team capped an historic weekend by taking the WRC manufacturers’ championship for the first time in 10 years.

Evans not only took his first WRC victory – and on Welsh home soil – but dominated the four-day rally. He set fastest times on nine of the 21 stages and, despite the challenges of rain, fog and muddy roads, held on to the overall lead from the first speed test on Friday 27 October. He became the seventh different winner and the third first-time winner, alongside Tänak and Toyota’s Esapekka Lappi, in what has been the most competitive WRC season in decades. Co-driven by Daniel Barritt, Evans was the first British driver to win the home round since 2000.

“Malcolm Wilson and the M-Sport team pulled off an extraordinary achievement at Wales Rally GB. The manufacturers’ championship, drivers’ championship, co-drivers’ championship (for Ogier’s co-driver Julien Ingrassia) and a home-round win in one weekend is amazing,” Rainsford said. “It will be a thrill to see the new world champions in action at Rally Australia, but there will also be unfinished business on the Coffs Coast. There’s still a battle for second in the WRC to be settled between Thierry Neuville and Ott Tänak and of course we’ll host the Australian Rally Championship decider between Molly Taylor and Nathan Quinn.

“I predict the gloves will now be off at Rally Australia. With the new faster louder and wilder-looking WRC cars making their first appearance Down Under, we’re going to host a cracking climax to the 2017 season.”

Ogier was emotional after claiming a hard-fought championship, during which he has won only two of the 12 rounds so far but finished on the podium a further seven times.

“I don’t know what to say. It’s just incredible. Thank you so much to the whole M-Sport team and Malcolm. It was a hard job. We work all very hard. It’s amazing to be World Champion with this team,” he said through tears. “I had very, very strong emotions on the finish line. I’m very happy for Elfyn. It’s amazing for M-Sport – victory, two guys on the podium, the manufacturers’ championship, drivers’ world championship – everything!”

Evans added: “It’s been a good rally. I’m incredibly grateful to everybody that has stood by me through all these years – to get to this point has taken a lot. To all the people who have supported me and backed me – this is for you. And this result only makes us even hungrier for more.”

WRC teams will now have barely a week to return to their bases and prepare their cars before they are air-freighted to Australia. Organisers are planning a big welcome for the international and Australian teams entered, with a free Rally Show and Ceremonial Start expected to attract thousands of fans to the closed main street of Coffs Harbour on Thursday 16 November. The competitors’ service park at C.ex International Stadium will be a hub of rally activity and free entertainment, including driver appearances, music concerts, fireworks, student visits, souvenir sales and a $5000 cash giveaway, throughout the weekend.

Tickets are on sale at www.ticketek.com.au, with a 2-for-1 offer on a $99 all-stages passes available until Tuesday October 31.