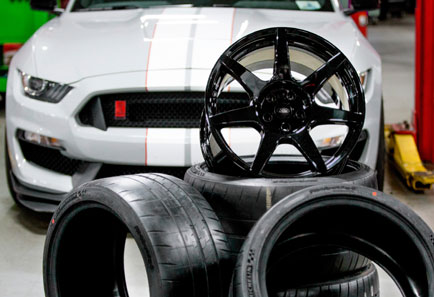 Ford and Carbon Revolution are providing a glimpse into what is possible for the Australian automotive industry as the Geelong-based innovator begins production of the worldâ€™s first mass-produced carbon fibre wheels for the Shelby GT350R performance car in North America. The project is an example of the work Ford is doing with about 63 suppliers who will continue operations beyond 2016, including 17 who now have earned new business with the companyâ€™s global operations.

â€While many people believe the auto industry is closing in Australia, Ford is actually investing $300 million in R&D in Australia this year alone â€“ and our partnership with Carbon Revolution is an example of what can happen as we continue to innovate here,â€ according to Ford President and CEO, Graeme Whickman. â€œAs we move to a new phase in the Australian automotive landscape, enabling our supplier network to grasp new technology opportunities will be good for Australia, including our existing manufacturing team members who are seeking new opportunities and those tertiary students wishing to have a career in the auto industry.â€

Ford has been working for around 18 months to ensure its employees are able to transition to the next phase of their lives through several Geelong supplier fairs, providing a $10 million contribution to the Federal and Victorian Governmentsâ€™ Geelong Region and Melbourneâ€™s North Innovation and Investment Funds. Carbon Revolution was a recipient of the investment and innovation fund and now employs several former Ford workers at its Waurn Ponds plant in Geelong.

â€œGeelong will continue to be important for the auto industry as we shift to a business model that is based on ideas and innovation more than hands-on work,â€ Whickman said. â€œThis type of development shows that there is potential for the ongoing sustainment of a high-tech supplier industry here in Victoria.â€

By the end of 2017, Ford expects to become the countryâ€™s largest auto employer with around 1,500 highly skilled employees across professions such as engineering and design.

â€œConsumers today want better fuel efficiency, but they also want more technology and features in the car, which usually adds weight to the vehicle,â€ said Dave French, director, Asia-Pacific Vehicle Programs. â€œA focus on light-weighting will be fundamental to our industry for years to come, and we are investigating many advanced materials applications as possible solutions for weight reduction in our vehicles.â€

Ford and Deakin researchers have been focusing on the key challenge of manufacturing carbon fibre more affordably for mainstream vehicle production. The research focuses mainly on reducing energy costs whilst increasing production throughput. Energy represents up to 20 per cent of the cost of producing carbon fibre. Ford and Deakin University have a long history of collaboration dating back to the early 1990s beginning with work around technology management and training of company employees.

The university established the Institute for Frontier Materials (IFM) in 2012 to address some of the major challenges facing society through innovations in materials science, design and performance. In 2014, Deakin University established Carbon Nexus, a globally unique carbon fibre and composites research facility, to specifically focus on carbon fibre and composites research.

Supported by the Commonwealth and Victorian governments, the AUD $34 million Carbon Nexus facility located at the Waurn Ponds campus of the University has two carbon fibre processing lines, one of which can manufacture various types of industrially relevant quantities of carbon fibre up to aerospace grade. Scientists also are conducting research into the chemical, mechanical and nano-scale characteristics of the carbon fibre materials produced on-site.

In 2014, Ford approved several university research project grants with Deakin enabling the company to draw on IFMâ€™s research capability, along with the Centre for Intelligent Systems Research (CISR) and other relevant areas of expertise within the university.