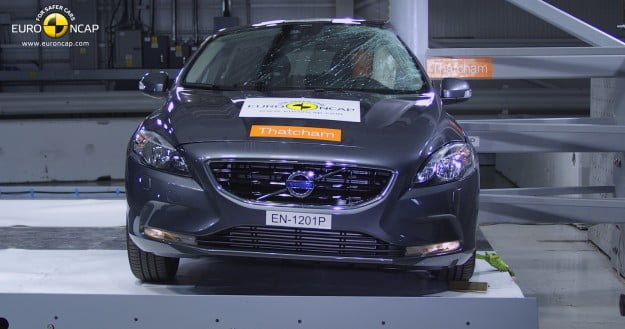 â€œThe ANCAP Rating Road Map sets out minimum safety requirements for each star rating â€“ one through to five stars,â€ said ANCAP Chief Executive Officer, Nicholas Clarke. â€œThrough this, year on year, ANCAP is setting the bar higher for vehicles to reach each of the star ratings.â€

In addition to achieving minimum scores across all physical crash tests, vehicles must be sold with a minimum range of safety equipment and safety assist technologies (SAT) as standard.

â€œThe V40 is equipped with a lengthy list of SAT including a world-first bonnet airbag system. Sensors detect when a pedestrian has been struck, lifts the bonnet and fires the airbag to provide greater head protection. The airbag covers the windscreen pillars and lower portion of the windscreen. It operates over a range of speeds and can detect different pedestrian statures,â€ said Clarke.

ANCAP goes on to acknowledge that in the pedestrian test of the All-New V40, the bonnet provided â€œgood protection in all areas likely to be struck by a pedestrianâ€™s head, making the V40 the first car to score maximum points in this area, [as well as being] one of the few vehicles to earn a â€˜Goodâ€™ rating for overall pedestrian protection.â€

Due to be launched in Australia at the end of February, the All-New V40 is charged with a plethora of standard safety features usually found on larger and more expensive cars.

Alongside our world-first Pedestrian Airbag technology, is the next-generation of Volvoâ€™s pioneering City Safety collision avoidance technology, which now works at speeds up to 50km/h.

â€œWeâ€™re delighted with what ANCAP had to say about the All-New V40,â€ said Matt Braid, Managing Director, Volvo Car Australia.

â€œAchieving the maximum safety rating possible is paramount, but the praise of our world-first Pedestrian Airbag technology gives weight to our â€˜safety beyond starsâ€™ philosophy and is yet another important step toward our 2020 target that nobody should die or be seriously injured in a new Volvo car.â€

With a range of fuel-efficient engines, advanced driving dynamics and slick Scandinavian design cues throughout, the All-New Volvo V40 has also been shortlisted for European Car of the Year.